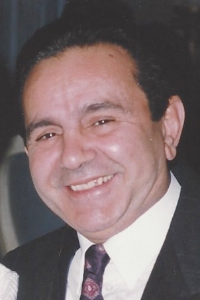 Stefano Avitabile, age 85, of Mansfield, passed away peacefully at home, surrounded by his loving family on Thursday, January 13, 2022. He was the beloved husband of Rosina (Gaita) Avitabile, to whom he was wed for sixty-two years.

Born in Avellino, Italy on May 9, 1936, he was a loving son of the late Antonio and Rosa (Masucci) Avitabile.

Stefano grew up and was educated in Avellino. He moved to the United States in 1964, first settling in Hyde Park. He later lived in Medfield and Dedham and had made his home in Mansfield since 2017. During the winter months Stefano and his wife Rosina loved spending time at their Naples, Florida condo.

Prior to retiring, Stefano had been employed for over twenty years as a driver for the MBTA. His love for family and friends was unconditional, especially his three daughters who were the essence and pride of his life.

Stefano was a communicant of Saint Mary’s Church in Mansfield. His hobbies included gardening, pristinely maintaining his automobiles, playing cards and pool. He was ever-so-proud of his Italian heritage, was a smart dresser, and enjoyed sitting down to a good meal. Being multilingual, Stefano capitalized on any opportunity to socialize and converse with people from all walks of life. He will be fondly remembered for his warm laughter and eccentric story telling.

In addition to his wife, he is survived by his devoted daughters: Gerarda M. Pisano of Mansfield, Rossella T. Muller and her husband Greg of Florida and Patricia A. Rodman and her husband Brett of Canton. He was the cherished grandfather of Ciara O’Donnell and her husband Patrick, Giancarlo Pisano, Jordan Rodman and his wife Jennifer, Lexi Rodman, Olivia Rodman and was the treasured great grandfather of Jameson O’Donnell. He was the dear brother of Alfonso Avitabile of Italy, Felicia Bini of Italy and the late Rosa Iandiorio, Antonio Avitabile, Rafaelle Avitabile and Gerardo Avitabile. He is also survived by his loving brother and sister-in laws, as well as his nieces and nephews.

His Funeral Mass, to which relatives and friends are cordially invited to attend, will be celebrated on Tuesday, January 18th at 11:00 A.M. in Saint Mary’s Church, 330 Pratt Street (Route 106) Mansfield. Burial will follow at Saint Mary’s Cemetery in Mansfield.

Visiting hours have been omitted.