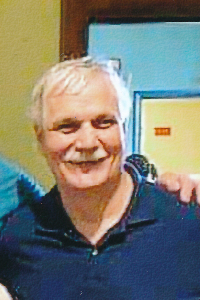 Whitman - Gregory S. Simmons 64, passed away peacefully after a period of failing health at the Brockton Hospital on Thursday January 13, 2022.

Greg was born on March 22, 1957 in Eugene, Oregon, son of the late George L. Simmons, Jr. and Frances M. (Kane) Simmons. He was raised in Whitman, attended Whitman schools and was a graduate Whitman-Hanson High School, Class of 1976.

Greg was a hard worker from his teens to his retirement. He had worked at United Shoe of Whitman, until it closed down and had also worked at PJ O’Donnell of Dorchester.

Greg will be remembered as a man who was “honest to a fault” and was a member of AA for the last 36 years. He was an avid fan of the Boston Red Sox and the Boston Celtics.

Greg will be greatly missed by many.

Greg is survived by two brothers, Robert J. Simmons and his wife Joanne of Norton and Brian Simmons and his wife Fay of Wareham, three sisters Jo-Ann M. Simmons (Kenny) of Whitman, Terry Jenness (Wayne) and Kathy Simmons of Conway, SC and his former sister-in-law Linda (Ferbert) (Simmons) Eldridge of East Bridgewater. He is also survived by his aunt and four cousins of Ocean Springs, MS as well as many nieces and nephews, including his niece and God-daughter, Lori Barry who was the center of his whole world. He leaves behind many friends especially his childhood friend Bruce of Whitman and his best friend for the past 30 years Tom of East Bridgewater. He was predeceased by his brother George L. Simmons, III and his wife Dale and his infant sister Sharon F. Simmons.

Family and friends are invited to attend his visiting hours on Wednesday January 19 from 5:00-7:00PM in the Blanchard Funeral Chapel, Plymouth Street (Rte. 58 @ the rotary) Whitman and his funeral services on Thursday January 20 at 9:45AM from the Chapel, followed by funeral Mass at 10:30 AM at the Holy Ghost Church.