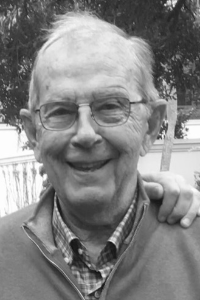 Robert W. Danforth of Mattapoisett, MA passed away peacefully on January 2, 2022 surrounded by his beloved daughters and several of his grandchildren. Born on February 16, 1931 in Quincy, MA, Bob was the son of the late Wallace and Ruth (Olson) Danforth.

After graduating from North Quincy High School in 1948, Bob attended the Massachusetts Institute of Technology, where he played varsity baseball and earned an Engineering degree. Upon graduation, Bob served in the U.S. Army and went on to earn an M.B.A. from Harvard Business School. Many of Bob's Harvard classmates would remain cherished friends for the remainder of his life.

Upon graduation, Bob joined Litecontrol Corporation, a commercial lighting manufacture and design company based in Watertown, MA and founded by his father, Wallace. Over the next five decades, Bob greatly expanded the scope and reach of the business, including the opening of a large manufacturing plant in Hanson, MA. Bob was an innovator in the field of "indirect lighting," and Litecontrol's designs and installations can be found in some of the Nation's most well-known libraries, airports, universities, laboratories, and retail establishments. After his retirement from Litecontrol, Bob's innovative lighting concepts have continued to flourish through the Danforth Lighting Center in Plympton, MA.

Throughout his tenure at Litecontrol, Bob treated his unionized workforce with respect and dignity. He was proud of the skill and workmanship of Litecontrol's employees, many of whom spent their entire careers working at the plant. In 1999, Bob sold the business to the employees through the creation of an ESOP corporation.

Outside of Litecontrol, Bob taught Entrepreneurship at Boston University's School of Management, served as a guest lecturer at other colleges, and served on the Board of Directors at Green Mountain College in Poultney, Vermont.

Bob was a great competitor. As a young man, he was a champion sailor and, later in life, became an excellent golfer. He loved sports, whether it was coaching his daughters' sports teams in the 1970s and 1980s, attending his grandchildrens' sporting events, or rooting for his beloved Red Sox.

Bob's kindness, hard work, humor, and inquisitive mind always were on display. He made friends wherever he went and treated everyone with respect. His big smile was infectious, his mind was curious, and he always saw the best in people. He cared deeply for his family, hosting a "camp" each summer for his grandkids at his home in Mattapoisett, MA. Much of life was spent by the ocean, his favorite place.

A memorial celebration service will be held at the First Parish Church in Weston, MA on Saturday, June 4th at 2 pm. In lieu of flowers, donations can be made to Weston METCO Scholarship Fund 49 Bay State Road, Weston, MA 02493 or Roxbury Weston Preschool P.O Box 241 Weston, MA 02493 website roxwes.org. For guestbook www.saundersdwyer.com