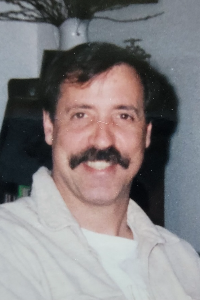 SACO- Timothy Hugh Flynn, 66 years old, died December 10th, 2021, at 10:30am at his home with his family around him.
Timothy, Timmy, Tim, Dad, Grumpy, Grandpa Tim- was born December 27th, 1954, of South Portland Maine. A son of the late Hugh Francis Flynn and five siblings. Tim was predeceased by his late wife, Linda Bedell-Flynn, and eldest brother Paul Flynn of Georgia. He is survived by siblings: Carol Ann Allen, Daniel Flynn, and Eileen Shaw of Maine. Survived by his Daughter Carrie Flynn of North Carolina, Stepdaughters Adrienne Powers-Johnson (Addie), Chelsea Powers-Murphy, Makayla Winchester, Grandchildren Maewyn and Fae Johnson, 3 nieces and 6 nephews.
Tim enjoyed the outdoors starting with his paper route as a young boy. His work ethic was strong. After Tim Graduated South Portland High School he went to work for the railroad with his father, who worked there his whole life. After working with the railroad Tim left and built small wooden toys in his garage. From there he made stools and sold them to local places and shipped them all over New England. Tim mastered his woodworking and started a spiral staircase company; his custom pieces are all over the country. Tim and his Business partner Dave Durrell created Saco Bay Millworks, in Gorham, then broke ground in Buxton Maine, and served the commercial community all over New England. His attention to detail and perfectionism showed in his quality work.
Tim enjoyed Hunting with his brother Danny, and Cousin Kevin Flynn. He also enjoyed ice fishing and fishing for striper. Camping was on the forefront of his mind and his dream was to build himself a cabin in the woods. Tim also played Electric Bass and was in many bands over the years, his most recent band was named “Dogs After Dark” with Addie, Late Rick Card, Tim Tyler, Dave Durrell, Norm Doughty, and Rick Powers. They played out at local restaurants. Friday night jam night was a tradition for over a decade. He was a man of family traditions, and loved Christmas, decorating with ornaments, lights, making wreaths, kissing balls and garland with his family. Tim and Addie who lived together on the farm just bought land together up north and started their first year with making Maple Syrup and Organic Certified Hay. He was loved by his family and his community. He will be greatly missed by all who knew him.
We will have a small ceremony at the Farmhouse on 25 Watson Mill Rd., Saco, ME on Saturday December 18th from 1:00-3:00 PM. Please bring warm clothes, a special ornament to hang, extra lights, ribbons and/or decorations for his evergreen shrubs in front of the house. We will have hot beverages and an outdoor fire in his honor.
Online condolence messages can be submitted at the Chad E. Poitras Cremation and Funeral Service website, www.mainefuneral.com