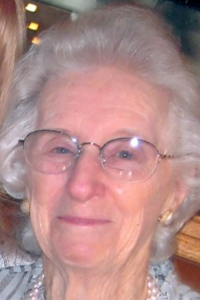 Irene’s parents and siblings arrived in the United States from Liverpool, England and settled in East Boston where she was born. Shortly afterwards, the entire family relocated to Medford where Irene resided most of her life.

After graduating from Medford High School, Irene worked as a Veterinary Assistant for Dr. Russ Holt in Medford and then became employed by Eastern Airlines as a Reservations Specialist. Once married to the love of her life Eddy, they remained settled in Medford, raised their family and eventually ran her husband’s business operations for Eddy Sign Company of Medford for many years. Irene’s love for the travel industry led her back to working as a Travel Agent for Baker Travel in Somerville, before retiring.

In between raising a family and work, Irene kept herself busy with her family and friends, loved to travel and believed strongly in volunteerism. Irene was a volunteer and active member of the St. Joseph’s Mother’s Club (Past President), Medford Visiting Nurses Assoc., Medford Catholic Women’s Club, Thursday Fortnightly Club and the Medford Boat Club, just to name a few.

The beloved wife of the late Edward Inserra, Irene was a devoted mother to Robert Inserra and his wife Dr. Annie Holmes-Inserra of Long Boat Key, Fla., Joyce Inserra of Londonderry, NH, Janis Guglielmi and her husband Domenic of Byfield and the late Eddy Inserra. She was a loving grandmother to Jenna, Michael, Eddy, Nikki, Mark, Matthew, Lyndsey and a loving great-grandmother to six great-grandchildren. The daughter of the late Arthur and Martha (Maddox) Ewins, Irene was the sister of the late George Ewins and Enid Morrill.

Irene’s funeral will be from the Dello Russo Funeral Home, 306 Main St., Medford Monday, December 13th at 10:30 AM followed by a funeral mass celebrated in St. Joseph Church, 118 High Street, Medford, at 11:30 AM . Relatives and friends are respectfully invited to attend. Services will conclude with burial at Oak Grove Cemetery, Medford. Visiting hours Sunday 3 - 6 PM.

In lieu of flowers contributions may be made in Irene’s name to the Alzheimer’s Assoc. or the Medford Visiting Nurse Assoc.