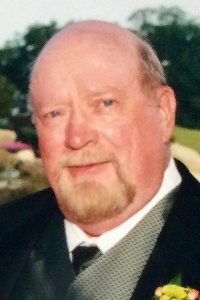 Jack was born in Lawrence to the late Helen (Carroll) Regan and John Regan, a Lawrence firefighter. He attended The Assumption Grammar School and graduated from Central Catholic High School in 1957. He went on to Northeastern University earning a B.S. in Business Administration in 1963.

After graduation Jack moved to Methuen, married his first wife, Carol A. (Jones) Regan built a home and raised four children. He worked for Raytheon, Itek, Sheraton and The State of Massachusetts Department of Education. His passion for politics and civic engagement was a thread that wove through his adult life. He was an active participant in numerous local election campaigns, including his own bid for State Representative, and served on the Greater Lawrence Vocational School’s School Committee for many years.

Always up for an adventure, Jack loved to host friends and family on his boat. He and Karen were Captain and First Mate of Best Regards for many years in Boston Harbor, where he was a member of the Port Norfolk Yacht Club. During retirement, Jack divided his time between Sudbury, Ocean Park, ME and winters in Venice, Florida. He will be missed by the many friends he made throughout his life.

Friends and family are invited to remember and celebrate Jack’s life on Saturday, December 18th, from 1:30-3:30pm at John C. Bryant Funeral Home, 56 Pemberton Road, Wayland, MA. Jack’s family invites friends and family to call from 1:30-2:30, with Memorial Service from 2:30-3:30. If you have a funny story or heart-warming memory to share at the service, but would rather not speak at the podium, please email it to JackReganMemorial2021@gmail.com and your story will be read aloud at the service.

In lieu of flowers, please consider a donation “In Memory of Jack Regan” to The Sudbury Fire
Department, 77 Hudson Road, Sudbury, MA 01776.