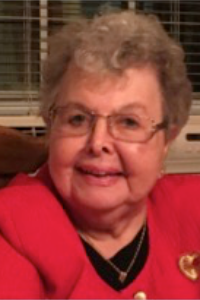 Wanda H. (Wojdag) Ippoliti, 86, of Franklin, MA, wife of the late Albert Ippoliti, passed away on December 1, 2021 with family by her side. She was born to the late Edmund Wojdag and Helen (Zaniewski) Wojdag on February 7, 1935 in Norwood, MA.

Wanda graduated from Norwood High School in 1952. She worked as a secretary at Bird & Son Corporation in Norwood. She married the late Albert A. Ippoliti on June 19, 1955 and settled in Franklin a few years later to raise her family.

While raising her young family, Wanda worked for the Woonsocket, RI Hospital, the Whiting & Davis Company in Franklin and the Franklin School Department as a kindergarten aide. She took a fulltime position in the Assessor’s Office in the Franklin Town Hall for many years then worked as a receptionist at Kendall in Mansfield. She remained active in her retirement, becoming a personal caregiver for the elderly and volunteered at the Franklin Senior Center.

Wanda moved to the Franklin Housing at Central Park Terrace in 2003, shortly after the passing of her beloved husband, Albert. She loved spending time with her family at her timeshare at the Von Trapp Lodge in Stowe VT. She enjoyed being with family, watching movies, and reading. She was enthralled in learning about history, geography and the mysteries of UFO phenomenon. She will be greatly missed by her loving family and many friends.

A private funeral mass will be held in January.