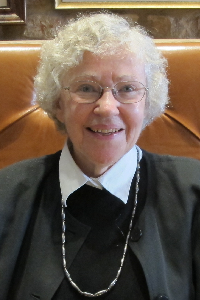 Armstrong, Lilian with deep sadness we inform her many family, friends, students and professional colleagues in America and Europe of the sudden death from heart failure on November 26th of Lilian Armstrong, Professor emerita at Wellesley College and the first holder of the Mildred Lane Kemper Chair in the Humanities. She was an internationally renowned and prolific scholar who authored five books and more than sixty scholarly papers examining the illuminated manuscripts and printed books of the Italian Renaissance.

Born in New Castle, Pennsylvania in 1936 she was quickly marked out as exceptional. She attended The Emma Willard School, before being accepted by Wellesley College from which she was graduated Phi Beta Kappa in 1958. She moved to New York City to attend Columbia University from where she received her Ph.D in 1964 with a thesis on the 15th-century painter, Marco Zoppo. Spending a year in Venice writing her doctoral thesis gave her a love of the city which was to last the rest of her life. From the sparseness of her graduate student days she quickly established an expertise in the pivotal and previously little-studied period of Venetian book history when lavishly decorated manuscripts and books were treasured possessions across many segments of society; her groundbreaking work introduced pioneering methods and was recognized by multiple awards as well as a prestigious invitation to open proceedings at a conference at the Doges’ Palace in Venice. While Lilian Armstrong’s impact on Renaissance scholarship was immense, she was also celebrated for her lucid lectures - she was in great demand as a speaker in the United States as well in London, Cambridge, Paris, Oxford, Venice, and Padua – and her exceptional generosity and accessibility to colleagues and her many grateful students over her forty years on the Wellesley faculty.

A funeral is planned at St. Andrews Episcopal Church, Wellesley, on Friday, December 3 at 11 a.m. In lieu of flowers, the family asks that donations be made to the Armstrong Art History Fund at Wellesley College.