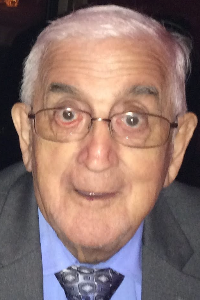 LOWELL Guiseppe L. ‘Joseph’ Quattrochi, 90 of Lowell, passed away peacefully on Saturday, November 13, 2021 at his home. He was the widower of the late Helena Maureen (Moore) Quattrochi whom he shared 63 years of marriage before she passed away in 2018.

He was born in Lowell on August 13, 1931 and was a son of the late Giovanni Quattrochi and the late Filomena (Tennerini) Quattrochi. He was raised in Lowell, where he attended the area schools graduating from Lowell Trade School with the class of 1949.

Since 1965, Mr. Quattrochi worked as a clerk with the Massachusetts National Guard until his retirement in 1991. He was a lifelong Lowell resident and communicant of St. Margaret of Scotland Church. He enjoyed watching TV, especially Western shows. "Papa Joe" as he was affectionately known by all, above all else, enjoyed spending time with his family which brought him the most happiness.

In addition to his wife and parents, Joseph was welcomed into heaven by his daughter, the late Gail Bonin; and his son in law, the late Stephen O’Brien.

In lieu of flowers, Joseph requests donations to be made in his daughter, the late Gail Bonin’s memory to Mass General Cancer Center at: https://giving.massgeneral.org/donate

On Saturday, November 20, 2021 all are welcome to attend his calling hours from 9 a.m. until 11 a.m. at the McDonough Funeral Home, 14 Highland Street, Lowell, MA 978-458-6816. His funeral service will be held at the funeral home at 11 a.m. followed by procession for burial and military honors at St. Patrick Cemetery.