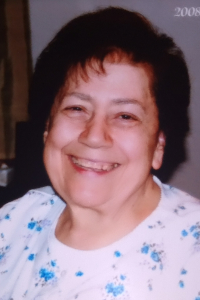 New Bedford – Dina (Katholos) Panagakos, age 93 of New Bedford passed away on Saturday, October 30, 2021. She was the beloved wife of the late Charles “Mike” Panagakos.

Dina was born and raised in a small village outside Sparta, Lakonia, Greece. As the oldest girl in a family of 8, she was put to work at a young age helping her mother take care of the family, and in her family's orange grove. As a teenager, she was trained as a seamstress. She lived through the great depression and its aftereffects, German occupation during WWII; and the Greek civil war.

She came to America in 1951 with her father, living in Washington D.C. where she met her husband. She worked as a seamstress in Jelleff's department store in Silver Spring, MD, helping clothe many prominent and fashionable Washingtonians of the 1950's, personally fitting and tailoring clothes for the store's most demanding customers. After having three children, she lived and worked in Maryland in the 1960's, and survived breast cancer.

She and her family moved to New Bedford in 1969, where she continued raising her children and worked as a seamstress. She became a Yiayia (grandmother) in 1980 and enjoyed her 3 grandchildren immensely; and became a great-grandmother in 2015. Dina enjoyed cooking, baking and giving Greek cookies to family and friends around the holidays, listening to Greek folk music, gardening, crocheting, and occasionally making doll clothes for some of her favorite little girls.

She was predeceased by her parents, Elias Katholos and Smaragda (Tsakonos) Katholos, her favorite aunt Ageliki “Angela” Dounias; her brothers Haralabos & Panayotis, and sister Eleni.

Dina’s visiting hours and funeral service will be held on Friday, November 12, 2021 at Perry Funeral Home. Visiting hours will be held from 10:30 A.M. -12:00 P.M. with a service to take place at 12:00 P.M. Burial will immediately follow in Pine Grove Cemetery.