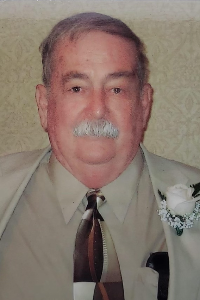 Mr. Corrigan is survived by his loving wife of 61 years, Jeannine C. (Emond) Corrigan; a sister, Patricia A. Markiewicz of Worcester and several nieces, nephews, grand-nieces and grand-nephews including, Barbara and Mark Senior of Worcester, Gail and Peter Totas of Oakham, Debbie and Paul Abasciano of Hilton Head, SC and Cindy Greene of Oxford. Ed also leaves behind his beloved family canine companion “Riley”.

Edward was born in Worcester, son of the late Edward H. and Flora A. (Vigeant) Corrigan and is also predeceased by a brother, Richard Peloquin and a niece, Tammy Murphy.

Mr. Corrigan is a graduate of Saint Peter’s High and proudly served his country by entering the United States Marine Corps. Upon returning from active duty with the Marine Corps., Edward began working for the former Johnson Steel and Wire Company until he went to work for the City of Worcester Department of Public Works, where he worked as a laborer and driver for the Street Department for over 18 years until his retirement in 2005.

Ed was a devoted member of Sacred Heart – St. Catherine of Sweden Parish where he volunteered for many years as a bingo worker and greeter. The church named the coffee shop after Ed and his wife for their 20 years of dedicated service to the Sunday Morning Coffee Shop.

He was a member of the Auburn / Southern Worcester County Lodge of Elks, the Marine Corps. League of Worcester and the Tun Tavern. Ed loved to watch western movies, especially his favorite actor John Wayne. He was an avid collector of anything that was affiliated with John Wayne. Mr. Corrigan truly loved to be with his family and spent many years coaching softball teams for his nieces and cherished the time he spent with his wife, Jeannine, especially when they traveled and took day trips to the casino.

The funeral will be held on Saturday, November 6, from the Alfred Roy & Sons Funeral Home 12 Hammond St. with a Mass of Christian Burial at 10 AM in Sacred Heart - St. Catherine of Sweden Church 600 Cambridge St. Burial with military honors will follow in Saint John’s Cemetery, Worcester. Family and friends are invited to calling hours on Friday, November 5, from 5 to 7 PM in the funeral home (Masks required for both the calling hours and funeral mass). Memorial contributions in memory of Mr. Corrigan may be made to the Sarah Pauline Gonsalves ACC Memorial Fund PO Box 67 Ashland, MA 01721, www.accwarriors.org