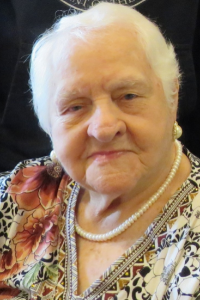 Peas was born on June 12, 1923 in Emeigh, PA to Norman and Dolly (Plouse) Michaels. She was always proud to be a coal miner’s daughter and a farmer’s wife. She spent her early years growing up in the areas of Emeigh and Westover.

In their early years together, they lived on the farm of J. Dale Marshall in Beyer, PA. Along with farming, they also had a milk route. Peas would drive the truck while Elmer would load the milk cans at each farm for their trip to the Kittanning milk plant.

During the war, they lived in Cleveland, OH where Elmer worked building airplane parts at The Martin Company.

Together they purchased a dairy farm near Cookport in 1945 where they would raise their family.

Peas was proud to be one of the first custodians hired at the newly constructed Purchase Line High School in 1957 where she would continue to work there until the birth of their third son, Ronald.

During the 1970’s and 80’s she did housework for several families in the Clymer and Indiana areas.

Peas would be more than happy to tell you that one of her proudest moments was winning 1st Place at the inaugural Powder Puff Tractor Pull at the Cookport Fair.

During their retirement years Peas and Elmer spent several winters in the warmer weather of Arizona and California.

In her later years she enjoyed sewing sequined calendars to give as Christmas presents and won ribbons at the Cookport Fair for her quality of work.

She was a member of the Calvary Baptist Church, Clymer, PA.

Peas was the last surviving member of her immediate family.

The family is thankful for the special help given by Lacey Kershishnik, Virginia McCoy, and Belinda Lloyd and would like to thank the VNA Hospice care nurses and assistants.

Family and friends will be received from 5-8:00 p.m. on Friday, October 29, 2021 and again from 9-11:00 a.m. on Saturday, October, 30, 2021 at the Rairigh Funeral Home, Ltd. in Hillsdale, PA, where an 11 a.m. funeral service will be held on Saturday immediately following the visitation. Mr. Richard Leasure will officiate. Interment will take place at East Ridge Cemetery in Westover, PA.