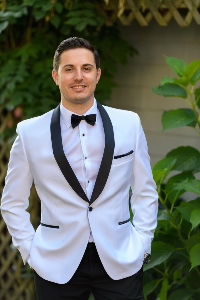 At age 24, Michael took on the biggest adventure of his life and spontaneously moved to NYC, where he experienced life in a way he never had before. He lived in Astoria, NY for several years before moving back to his hometown for family reasons and to complete his M.B.A from the University of Massachusetts – Dartmouth. Shortly after completion, Michael returned to NYC.

Anyone who knew Michael knew how much he loved life, his family and friends, soccer, wine and his Portuguese heritage. He has left an impression on many and his memory will continue to live on in our hearts.

Michael leaves behind his wife, Suhaida Marina Correia, his 18-month-old daughter, Sofia Alice Correia. Michael is also survived by his parents, Diomar and Dulce Correia, his brother Leonard Correia, his Uncle and Godfather, Joseph Ferreira, his tia Elvira, his father-in-law and mother-in-law, Zafarullah and Jacqueline Bhatti, his brother-in-law, Suleiman Bhatti, as well as many other relatives including uncles, aunts and cousins.

Michael’s visiting hours will be held on Friday, October 29, 2021 at Perry Funeral Home from 5:00 P.M. – 8:00 P.M. His funeral will take place on Saturday morning, beginning in the funeral home at 8:00 A.M. and followed by a Mass of Christian Burial at Our Lady of Mount Carmel Church at 9:00 A.M. Burial will immediately follow in Rural Cemetery.