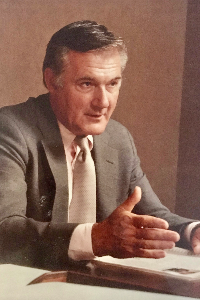 O’CONNOR, John F. “Jack” 87 of Wellesley, Massachusetts, passed away peacefully at home surrounded by family on October 24, 2021. Born in 1933 in the Elmhurst section of Queens, New York, he was the first of Francis and Ruth Acker O’Connor’s four children. Jack started working in third grade in the stockroom of a neighborhood hardware store in Queens, put himself through college at St. John’s University, served honorably and with great pride as an officer in the United States Marine Corps, and graduated with honors from the University of Missouri’s School of Journalism. He began his journalism career as a reporter at McGraw Hill’s Purchasing Week magazine, and went on to become the magazine’s editor-in-chief before serving for 15 years as the publisher of Purchasing magazine, the industry’s largest and best-known publication. A gifted orator with a rapier wit, Jack delivered hundreds of speeches across the country extolling the importance of purchasing and supply-chain efficiency as critical drivers of business success. As Purchasing magazine said upon his retirement in 2003, Jack helped “change history in the way U.S. corporations embraced supply chain management.”

Jack married the love of his life, Mary M. “Peggy” O’Brien in 1959, and raised six children with her. He parented like he led in business and the Marine Corps – with passion, grit, humor, and an eternal soft spot in his heart for underdogs. As his daughters Beth Regan and Jennifer Murphy have often said, he was both a “man’s man” and the “ultimate feminist.” He loved to read, watch his favorite sport of boxing, debate the issues of the day every night with Peggy and his kids at the family dinner table, and socialize with his many friends and loved ones, especially his beloved grandchildren. He brought vitality and magnetism to every room he entered, and was a cherished mentor to many.

Jack is survived by his wife, Peggy, his sister Judith Schmauch of Huntington, New York, his brother James of Fort Belvoir, Virginia, and was pre-deceased by his sister Eileen O’Grady of Middle Village, New York.

Visiting hours will be held at the George F. Doherty & Sons Funeral Home, 477 Washington St., (Rt.16) WELLESLEY on Friday, Oct. 29 from 4-8pm. His funeral will take place from the funeral home on Saturday, Oct. 30 at 11am followed by a Funeral Mass in St. Paul’s Church, Wellesley at 12pm. Relatives and friends kindly invited. Interment in Woodlawn Cemetery, Wellesley. In lieu of flowers, the family asks that donations be sent to Operation Homefront in honor of the deceased.