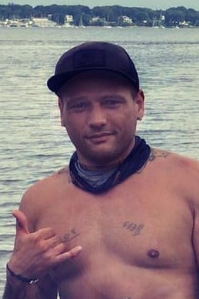 SWANSEA… Derek S. Frizzell, Sr., 32 of Swansea passed away unexpectedly at his childhood home in Swansea, Friday, October 15, 2021.
He was born in Fall River a son of Stephen T. and Ann M. (Boyko) Boyko-Frizzell of Swansea and had lived in Swansea for most of his life.
Derek was a salesman for Heavy Equipment as well as Hydraulic Components for Patriot Equipment in Dighton. He also held positions at the Lobster Trap Restaurant, Home Depot, and Amazon Fulfillment Center. He worked as an Apprentice at the Iron Workers Union Local Number 37.
Mr. Frizzell enjoyed working out constantly, swimming across from his boyhood home in Swansea, fishing with his 2 children, as a youth his love for motorcycles started with dirt bikes and moved to his Ducati model number V999 and liked working on bikes with his dad. He loved walking on the beach or just sitting on the porch with his mom. He represented the Silver Mitts in boxing in 2004 when he was 15. Derek was a standout Freshman Football player for Case High School. He attended Swansea Schools, Diman and B.C.C. He was also a graduate of New England Tech. He was an avid reader and loved current events.
Survivors include his parents,a sister Sonya Lee Medeiros, a son Derek S. Frizzell, Jr a daughter Amber R. Frizzell, and their mothers Kayln and Natalie, his grandmothers Evelyn Patten and Margaret K. Boyko, his aunts Linda Frizzell, Lisa Patten, Geralyn Boyko-Bird, his uncles Robert Frizzell and John G. Boyko many cousins including Nick Paquette. He was grandson of the late Frank J. Boyko, Jr and nephew of the late Frank J. Boyko III.
Private services will be under the direction of the BOYKO MEMORIAL FUNERAL HOME, 709 Broadway, Fall River. A celebration of life will take place in the spring.