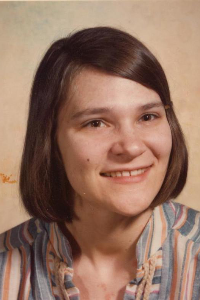 Beth E. (Divoll) Ferguson passed into life eternal on Thursday Oct. 21, 2021. She was born and raised in Baldwinville to Francis and Dorothy (Johnson) Divoll. George G. Ferguson, her husband of 40 years died in 2019.

She leaves a sister Amy Sheppard and her husband Paul in Connecticut 2 brothers- Francis Divoll, Jr. and his wife Sandra of New York and Michael Divoll Of Franklin, and many nieces and nephews.

She was predeceased by her sister Jo Ellen Parker.

She worked for many years at Wrentham Developmental Center and then at Lemuel Shattuck Hospital in Jamaica Plain until her retirement.

She was an active member of the Franklin United Methodist Church and held many leadership positions in the church. She became the District Director of Lay Servant Ministries for Central Massachusetts, training many people in leadership in the church.
She retired when she was diagnosed with ALS in 2019. She has had a long battle with ALS and was able to do the Boston Walk to Defeat ALS for the last few years with Beth’s Brigade.

Calling hours will be held in the Charles F. Oteri and Son Franklin Funeral Home 33 Cottage St. on Thursday Oct. 28th from 3-6PM.

A funeral service will be held on Friday Oct. 29th in the Franklin United Methodist Church 82 West Central St. at 1PM. Masks must be worn in the church.

In lieu of flowers, Donations may be made to the ALS Association Massachusetts Chapter.