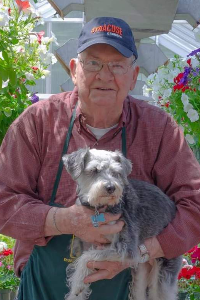 Born in Somerville, raised in Charlestown and Arlington Mass ; Don “Butch” Seager made a name for himself on the football field at Arlington High School. His  talent and fierce dedication to the game he loved forged his path to Boston College and the Marine Corps beyond. Don held master’s degrees in Mathematics and Education from Union College and Boston State and an advanced studies certificate in educational administration  from Bridgewater State College.

Don was a pillar of strength and a goodwill ambassador to all who knew him. He was a proud Marine, BC football player and educator. Don spent the majority of his career in education in Dedham Mass. He loved and nurtured many students and athletes as a teacher, coach and athletic director. Don received many recognitions and awards for his work and dedication to the public school children and his beloved town of Dedham. He fondly remembered his days as principal of the Dedham Middle School.

Boston College honored him with a Campion award to recognize his years of excellence in the field of education. He received honors from the Massachusetts Schoolboy Hockey Commission, Citizen of the Year from the Dedham Lyons Club, Massachusetts Football Association Award and the Ed Kelley Award from the Dedham Public Schools.

Don was involved with the Dedham Community House as it’s director following his retirement. He also was involved in local politics campaigning for friends and holding office as a recreation commissioner.

In recent years, Don enjoyed gardening with his friends from the Dedham Community Greenhouse at Endicott Estate. He also started a chess club for elementary students in Dedham. He  attended many Boston College football games with his nephew Keith and good friend Tony. He often enjoyed coffee with his good friend Frank Barbuto. His friend George Fahey  would visit often, reminisce and share a cocktail and a laugh.

Don’s greatest pride and joy were his grandchildren. He spent many enjoyable days with them ..teaching them to carve, paint, plant, sing the Marine Corps hymn and treat people with kindness and respect. Don was dedicated to his wife Mary and was happy to celebrate their 60th wedding anniversary with her by his side.

A private funeral Mass will be held at St. Mary Church, Dedham on Monday, October 25, at 10am. Interment private. A celebration of life will be held at a later date. In lieu of flowers expressions of sympathy may be made in Don’s memory to the Dedham High School Boosters Club, 140 Whiting Ave. Dedham MA 02026 or Endicott Community Greenhouse, 245 Mt. Vernon St. Dedham, MA 02026.