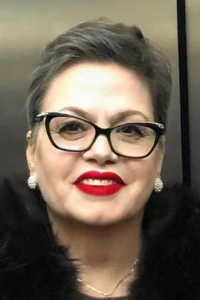 Xhuljeta Fida, 63, of Worcester passed away on Thursday, October 21st at home surrounded by her loving family. She leaves her husband, Gazment Fida; her daughter, Marsela and her husband, Bruen Spiro of Worcester; her mother, Lejla (Abazi) Duri of Albania; two brothers, Petrit Duri and Genci Duri of Tirana, Albania; a sister, Miranda Gacaj of Tirana, Albania; and a granddaughter, Kiara.
She was born in Tirana, Albania the daughter of Pandi Duri and emigrated to the United States in 2009. Xhuljeta enjoyed spending her time on walks, cooking, shopping but most of all she cherished the time she spent with her granddaughter, Kiara.
A visitation will be held on Saturday, October 23rd from 9:00 until 10:00 a.m. in O’CONNOR BROTHERS FUNERAL HOME, 592 Park Avenue followed by a graveside service in Hope Cemetery. Facemasks are required in the funeral home.