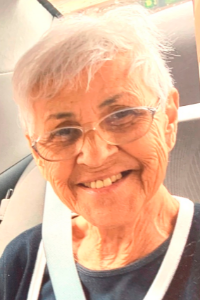 Pauline M. (Michaud) St. Pierre, 84, a former resident of Salem, passed away peacefully at the Kaplan Family Hospice House in Danvers on Thursday, October 21, 2021. She was the devoted wife of the late Donald J. St. Pierre with whom she shared years of marriage.
Born and raised in Salem, she was the daughter of the late Arthur and Hedwidge (Gagne) Michaud. She was a lovely and determined woman, who could do anything she set her mind to accomplish. She was incredibly talented at painting and needlepoint and was also an accomplished seamstress. Pauline was an avid golfer who enjoyed years of great fun with her ‘golf girls’ and ‘card girls.’ She spent her last days at Putnam Farm Assisted Living in Danvers where she kept other residents in stitches with her witty comments and antics.
She will be greatly missed by her family, extended family and many friends.
Pauline is survived by her children; Janet Scott and husband Jim of Cape Neddick, ME,
Eileen McDermott and husband Joe of Beverly, Don St. Pierre of Eliot, ME and Tim St. Pierre and Wife Cait of Timmons, NB, Canada and fourteen grandchildren; Aimee, Jimmy, Andrew, Nicole, Kyle, Colby, Connor, Melissa, Tabitha, Stefanie, April, DJ, Dylan and Moira and nine great-grandchildren, Adrianna, Shaun, Declan, Emily, Evan, Nora, Zakari, JJ, and Dante.
Pauline also leaves her brothers, Norman Michaud and wife Kathy, Eddie Michaud and wife Debbie, sisters-in-law, Linda Andino and husband Joe, and Joan Madore, her special friend, Mary Lawrence as well as many nieces and nephews. She was predeceased by her brother Arthur Michaud and sister, Lena Demeule, and her sister-in-law Yvette Conley and brother-in-law Bebe St. Pierre.
Relatives and friends are invited to her Mass of Christian Burial on Monday, October 25, 2021 at 11:00 AM in Ste. Anne Church, 290 Jefferson Ave., Salem. Burial will follow in St. Mary Cemetery, Salem. There will be no visiting hours. In lieu of flowers, kindly consider a memorial contribution to your favorite charity. Salem requires protective face masks to be worn indoors. Assisting her family with arrangements is the Levesque Funeral Home of Salem. For guestbook and to send a message of support to her family, please visit www.LevesqueFunerals.com