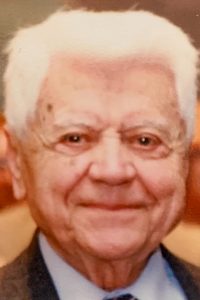 Christopher Lekas, 96, of Worcester died Tuesday, October 19th in Holy Trinity Nursing Center. Chris was predeceased by his wife of 63 years, Yolanda (Leo) Lekas who died in 2015 and his brother, Arthur Lekas who died in 1992. He was born in Glina, Albania to Greek parents Michael A. and Lambrini (Fotiades) Lekas. In June, 1934, when Chris was nine years old, he and his mother emigrated to the United States to join his father and brother who had already settled in Worcester.

Chris often reminisced about his early experiences in his native village and voyage to America through Ellis Island and on to his new home in Worcester. Quickly making friends in his Kelley Square neighborhood, Chris often shared many entertaining and amusing stories about his gang of poor Greek kids and their adventures during the Great Depression.

Chris attended the Worcester North High School until he joined the Army in 1943. A veteran of World War II, Chris served at the Battle of the Bulge in Belgium as a paratrooper in the 17th and 101st Airborne Divisions. After the war, Chris worked as a hairdresser in Worcester where he met his future wife, Yolanda Leo. Married in 1952, Chris and Yolanda lived in Worcester, moving in 1957 to Shrewsbury with their new son Michael. Until 1968, Chris owned and operated the Avalon Hairdressers in Worcester, after which time he opened the White City Pizza in Shrewsbury. He retired in 1985. Indulging his fondness for Florida, Chris and Yolanda had the good fortune to spend winters at St. Petersburg Beach for the next 15 years.

Chris was a devoted member of the St. Spyridon Greek Orthodox Cathedral, serving its parish council many times as president, vice-president, and treasurer. Chris was a life member of the Greek fraternal organization Order of AHEPA and the Pan-Epirotic Society. In his later years, Chris spent many afternoons enjoying the company of lifelong friends at the St. Spyridon Seniors Club rarely turning down a good card game. Throughout his life he tirelessly served his Greek community with enthusiasm as a chairperson and volunteer at many church functions.

With the love Chris had for his family and friends and his charitable heart, he often extended his hospitality to strangers, treating them as friends. Likewise, Chris enjoyed the friendship of most who knew him.

Chris leaves two sons, Michael C. Lekas and wife, Bonnie A. Lekas of Jacksonville, Florida, and John P. Lekas of Worcester; his beloved granddaughters, Keri E. Stewart and her husband, Zebbie, and Kristina E. Lekas, all of Jacksonville; sisters, Ethel Demarky and Helen Panagiotou, both of Worcester, and many nieces and nephews. Chris also leaves a large extended family of cousins, great-nieces and nephews and many cherished friends.