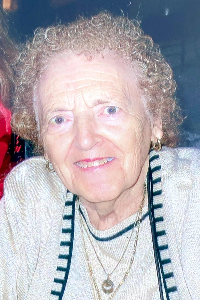 Galgani, Elsie N. passed away peacefully on October 11, 2021, at the age of 95. She was born in Boston, Massachusetts in 1926, where she was raised and went to college. Elsie and her husband John married in 1951 and had a wonderful marriage. They raised three children in Wellesley, Massachusetts. After her husband’s death in 1995, Elsie moved to Tampa, Florida to be with her daughter Linda’s family and was essential to the upbringing of her two granddaughters, Lauren and Ava Whalen. She was the oldest of four children, Esther, Cosmo, and Richard. Her siblings preceded her in death. They were the children of the late Cosimo Damian Nicastro and Esther Florence Nicastro of East Boston, Massachusetts. Elsie was the beloved mother of David (Deborah), John Jr. (Carol) and Linda (Tom Whalen). Elsie was also the beloved grandmother to Katherine Rensing (Adam), Paul (Charity), and Brian (Ashley). Elsie had five great grandchildren, William and Margaret Rensing, Lillian and Adele, and Christopher, with another great grandchild due in December.

Elsie was the matriarch of her family. Elsie and her husband John gave encouragement and support to her siblings, nieces and nephews, who remember their kind acts with great fondness. Besides working as a pharmacist in a community pharmacy and hospital, Elsie and John were devoted parents and grandparents. Elsie graduated from Massachusetts College of Pharmacy in 1948. A natural leader, Elsie was the President of the Lambda Kappa Sigma pharmacy sorority, and as an alumnus, she mentored undergraduate sisters. Elsie and her closest sorority sisters remained friends for the rest of their lives. Elsie and John were the driving force in their children’s pursuit of their careers; all three received postgraduate degrees. Giving their children a well-rounded education, including plenty of supplemental experiences such as classes at the Museum of Science and Museum of Fine Arts in Boston and music lessons, they never missed an athletic event, dance recital, or musical performance of their children.

Elsie was loved by those who knew her, and she will be greatly missed. Remembering all the precious moments with family and friends will live on in our hearts and minds.

A visitation will be held at the George F. Doherty & Sons Funeral Home, 477 Washington St. (Rt. 16) on Saturday, November 13, from 8:30-9:30am followed by a Funeral Mass in St. Patrick's Church, 44 East Central St. Natick at 10am. Relatives and friends kindly invited. Interment in St. Patrick's Cemetery, Natick.