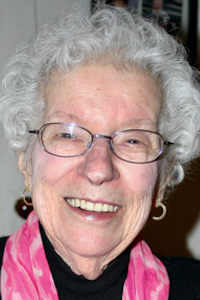 Dorothy Ciborowski died peacefully at her home in East Sandwich on Monday October 11. She was 93.

Dorothy Alves was born and raised in New Bedford, MA. When she was 15, she met her future husband Chester Ciborowski at Fort Phoenix. Four years later, after he returned from World War II service in the Army, they married.

Together they raised four children in New Bedford. Later they moved to Cape Cod and built an ornamental blacksmith business, Packet Landing Iron in West Barnstable. While he forged, Dotty sold his wrought-iron lamps and fireplace screens and ran the business. She was a natural saleswoman.

Dotty served as a poll watcher for countless elections. She was a communicant at St. Francis of Assisi in New Bedford and later at Our Lady of Victory Church in West Barnstable. She was a strong advocate for the well-being of children.

Dotty will be remembered for her extraordinary sense of compassion for others, her humor, her generosity, and her fondness for her hometown New Bedford.

There will be an outdoor burial service at the National Cemetery in Bourne on Friday October 29 at 2 PM. All are welcome.

Donations in her name may be sent to her favorite charity, St. Jude's Hospital.