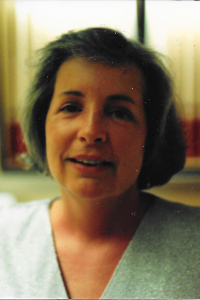 AUBURN/WORCESTER -- Emilie A. (Crandell) Anderson passed away after a period of declining health on 10/15/2021. Born 10/24/1937 at the Elizabeth Lund Home in Burlington, VT, she was the adopted daughter of Clinton & Mary (Lynam) Crandell and grew up in Shrewsbury, graduating from Shrewsbury High School.

Emilie married the love of her life, Donald Anderson on June 28th, 1958. Emilie embraced her life as a wife to Don, eventually a mother to her sons Donald and Douglas and a grandmother to her grandchildren Douglas and Emily Anderson. Emilie said that the thing she was best at was loving her husband, here children and grandchildren and she put her whole heart into the job. Emilie and Don loved travel and travelling with family, whether on camping trips with their young children, road trips around New England, visits to museums, beach trips and later in life more exotic destinations such as Hawaii, Ireland and Spain.
Emilie worked in clerical positions and as a nurse’s aide when her children were young and for many years at Memorial Hospital in Worcester when here children were grown, moving from ward clerk to administrative secretary during her time at Memorial, which she always remembered fondly and felt that she had found here place there. After retirement she worked at the Macy’s Department Store in the Auburn Mall, enjoyed fluffing and folding and tidying up the shelves and enjoyed interacting with customers—especially the children.
Emilie was raised with a progressive attitude towards her adoption and always felt fortunate and chosen. Later in life she was able to locate and have warm relationships with her biological parents, Sylvia Tucker of Barre, Vermont and George LaBounty of Bisbee, Arizona, and came to know her many half-siblings who welcomed her with open arms.

A graveside memorial service for Emilie will be held at 11:00 AM on Saturday, October 23rd at the New Swedish Cemetery/All Faiths Cemetery at 9 Island Road in Worcester.

The family would like to express their thanks and gratitude to the staff of Homestead Hall for filling the last year of Emilie’s life with love and joy, and to the Hospice Services of the Jewish Health Care Center for making her last days dignified and peaceful.

In lieu of flowers, donations may be made in Emilie’s name to:
Homestead Hall at 10 Homestead Avenue, Worcester MA 01610. To leave an online condolence message, please click guestbook link.