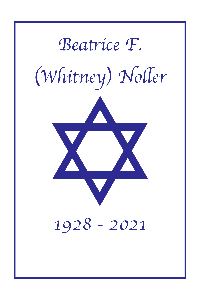 Beatrice was married to the late William Noller, who died in 1997. She is survived by three sons, John Prest of Worcester, Ronald Prest and his wife, Linda of Webster and Richard Prest and his wife, Patti of Webster; a daughter, Beatrice Marr and her longtime partner, John Flaminio of Las Vegas, NV; a sister, Ada Dumas of Shrewsbury; 7 grandchildren; 12 great grandchildren and many nephews and nieces.

Mrs. Noller was born in Worcester, daughter of the late Robert Whitney and Julia (Naujokas) Richford and is also predeceased by a brother, Robert Whitney.

Beatrice always had her family as the centerpiece of her life. She cherished all the time she was able to spend with them, especially her grandchildren and great grandchildren.

A private burial for Beatrice will take place in B’nai B’rith Cemetery, Worcester where she will be laid to rest next to her husband. Memorial contributions in memory of Mrs. Noller may be made to a charity of your choice.