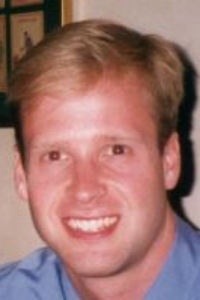 DAVIES, John H. passed away on September 22, 2021, after a twenty-year struggle with the aftermath of an anoxic brain injury sustained during his second year at Columbia Medical School. John Howland Davies was born December 16, 1974, in Boston, MA, son of John A.K. and Alice I. Davies. He is survived by his parents, his sisters, Laura Davies and Katharine Smith, his niece, Aimee Smith, and nephews, Kent Smith and Ryan Casey. Throughout his life John's family home was in Weston, MA, except during his father's service in the U.S. Army, in Fairbanks, Alaska, in the mid-70s.

After graduating from Weston High School, John attended Harvard University where he concentrated in Economics, also taking "pre-med" courses. Before entering medical school he spent a year in Spain to learn Spanish for better communication with patients in NYC. John's family is most grateful to Riverside Community Care, Dedham, MA, for his care over the past decade in a supervised apartment.

John is remembered by his large extended family and abundant friends as fun, caring and loyal. He was a talented athlete, in skiing and fly fishing, as well as in team sports. His family plans to organize informal gatherings of those who loved him.