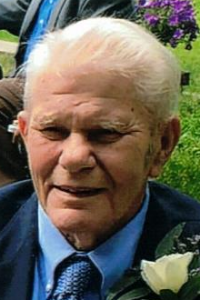 Robert J. Walker, 85, of Medway died peacefully on Saturday, October 2, 2021, at his home. He was the beloved husband of Esther (Mortarelli) Walker since 1961.

Born in Oakland, CA on April 1, 1936, he was the son of the late William and Lillian (Venstrom) Walker.

Bob was a resident of Medway since 1967. He grew up in Wellesley, graduated from Wellesley High School in 1955 and proudly served in the Air Force for 3 years.

Before his retirement, he worked as a truck driver for the former F. Diehl & Son Lumber and Oil Company in Wellesley for 26 years and was a member of the Teamsters Union.

Bob enjoyed fishing, collecting model cars and was a stain glass artist. He was an avid New England sports and hockey fan and loved playing hockey with his children.

Besides his wife, he is survived by his children, Robert and his wife Carolyn of Dallas, TX, William and his wife Grace of Medway, Richard of Medway, Christopher and his wife Michelle of Phoenix, AZ and Timothy and his husband Gallagher Lawson of Los Angeles, CA. He was predeceased by his son John Walker who died in 2015.

He was also the brother-in-law of Julia Brocklebank, Constance Beekman, Jean McCorry and Dr. Paul Mortarelli.

Relatives and friends are invited to attend his funeral service on Tuesday, October 12 at 11:00 a.m. in the Ginley Crowley Funeral Home, 3 Barber St. in Medway (www.ginleyfuneralhomes.com).