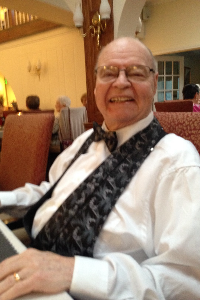 Malcolm E. Robinson, age 82, of Middleton, formerly of Reading, passed away on October 3, 2021. He was the beloved husband of Jane E. (Robinson) Cudmore Robinson and the late Margaret M. (Pages) Robinson.

Born in Exeter, NH, Malcolm was the son of the late Donald and Marjorie (Ring) Robinson. He was raised and educated in Exeter, and was a graduate of Exeter High School. He graduated from Boston University and went to work with Fidelity Investments, and spent 42 years as an institutional stock trader. He retired from Morgan Keegan in Boston.

In his spare time, Malcolm was a model railroad enthusiast, and could be found working on them and getting together with other railroad aficionados to run the trains. An avid traveler, he enjoyed many train trips and cruises with Jane, including a memorable voyage on the Queen Mary II, and he especially loved their trips to Hawaii and Alaska. He also enjoyed dancing and going out to dinner.

Relatives and friends are kindly invited to gather for Visiting Hours at Costello Funeral Home, 177 Washington St., Winchester, on Thursday, October 7, from 4-7PM. A Funeral Service will be held on Friday, October 8 at 10AM at the Second Congregational Church of Winchester, 485 Washington St., Winchester, MA 01890. Masks are required in the funeral home and church. Burial will follow in Charles Lawn Memorial Park, Reading. In lieu of flowers, donations in Malcolm’s memory may be made to the Second Congregational Church at the address listed.