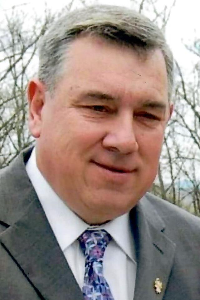 SPENCER: Kevin A. Hayes, 66, of Woodside Road died Saturday, October 2 in Harrington Memorial Hospital due to complications of Covid-19.
He leaves his wife of 42 years, Donna M. (Burnor) Hayes, four sons; Joshua R. Hayes of Leicester, Jordan A ., Justin F., and Jacob K.A. Hayes all of Spencer, a daughter Jaymee L. Hayes of Spencer, his mother Marguerite P. (Derosier) Hayes of Spencer, three sisters; Karen Hayes Sullivan of Spencer, Debbie Malpass and her husband Wayne of Auburn and Sandra Masiello of Spencer and his one and only grandson Bryson K.M. Hayes who he was devoted to. Many nieces and nephews and lifelong friends Kevin Huard of Leicester and State Representative Donnie Berthiaume of Spencer. He was predeceased by a son Jeremy Hayes in 2017, a daughter Jessika A. Hayes in 2006, two brothers; Francis and Robert Hayes and a sister Louann Flewelling.
Kevin was born in Worcester, son of the late Francis D. Hayes. He graduated from David Prouty High School Class of 1973 and Worcester State College. He was a Real Estate Appraiser for Liberty Property Manager for over 40 years. He was a member of Mary, Queen of the Rosary Parish. He was a former member of the Spencer Board of Selectmen and the Spencer East Brookfield Regional School Committee serving as chairman.
The funeral will be held on Thursday, October 7 with a Funeral Mass at 10:00 AM in Our Lady of the Rosary Church, Spencer (Please go directly to church). Burial will follow in Mary, Queen of the Rosary Cemetery, Spencer. There are no calling hours. In lieu of flowers memorial donations may be made to Mary, Queen of the Rosary Parish Memorial Fund, 46 Maple Street, Spencer, MA 01562. J. HENRI MORIN & SON FUNERAL HOME, 23 Maple Terr., Spencer is directing funeral arrangements.