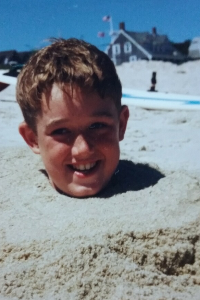 Patrick G. Wayne, 35, a lifelong Lowell resident, passed away on Sunday, September 26 at his home in Lowell. Patrick was the beloved son of the late Mildred (Duffy) Wayne who passed away in 2004 and the late Gerald Wayne who passed away in 2009. The loss of his parents shattered Patrick's young 23 year old heart, leaving him despondent, something he would never fully recover from. Despite his heartfelt and passionate efforts to overcome it, the chemical changes set off by his deep love for his parents were irreversible and exponential, an unfair fact of life needed to be spoken of more often. He fought a 13 year battle, refusing to give up, but mental illness proved itself sadly, once again, to be too formidable an opponent. In the end, simply and correctly stated, Patrick died of a broken heart. His family wants you to know that they have nothing but love and respect for him for placing that kind of a value on his relationship with his parents. All 3 are sadly missed by their remaining son, Eric.

Patrick was born on April 24, 1986 in Lowell and was raised and educated in Lowell. He graduated from Lowell High School with the class of 2004. While at Lowell High under the legendary tutelage of Tim O'Keefe and George Bossi, Patrick was a standout wrestler, helping Lowell High School to win the Massachusetts state wrestling championships in 2002 and 2004. Patrick wrestled since the age of 6 and his high school career ended with a record of 121-13. As a senior, he earned the Massachusetts Division 1 State Championship and All State Championship at 125 lbs, finally reaching a goal he had set for himself as a boy. He also finished third at the New England Tournament, was a two time Lowell Sun All Star and MVC All Star, a Boston Herald and Boston Globe All Scholastic Choice and two time champion of the prestigious ‘George Bossi Lowell Holiday Tournament.’ He went on to wrestle collegiately at Division 1 Edinboro University in Pennsylvania while working towards a degree in Health and Physical Education. As a Fighting Scot he wrestled on a daily basis with and against past and future olympians, all the while being coached by Lou Rosselli, an olympian himself all under the watchful eye of 2 time olympic gold medalist Bruce Baumgartner, one of the most decorated wrestlers in the history of the sport and the Athletic Director of Edinboro University at the time. After college he taught wresting at several different youth and high school programs, reserving his most intimate of coaching moments for those he considered his family and friends, most importantly, Drew Diamantopoulos.

Though his illness made it difficult for him to access the things he loved most, he did love so much about this world. Patrick coveted his friendships, he had an unmatched thirst for knowledge, he read endlessly throughout his life and due to that, developed an uncanny nature to put things beautifully in perspective for those in need of it at any given time even in his darkest hour. His favorite author was Charles Bukowski and he adored Grateful Dead lyricist Robert Hunter. Pat was a lover of improvisational music. The most beautiful times in his life were spent attending concerts. The most beautiful relationships he formed were with those whom he attended Phish, Grateful Dead, Allman Brothers, and Dave Matthews shows. Music was his lifeblood. He loved everything from NWA to James Taylor. He loved Amos Lee, Assembly of Dust, The Black Crowes, Mac Miller, Wu Tang Clan, Bob Marley and so on and so on and so on. The 2 musicians that touched him the deepest were Jerry Garcia and Trey Anastasio. His favorite movie was True Romance, his family has no doubt that he spent some of his spare time in the mirror with gold rimmed Elvis Presley glasses on because there were times in Pat's life that he thought he was as cool as Clarence Worley.

Patrick loved his Boarding House Park family and valued his time working in the music industry especially with Peter Aucella and John Marciano. He was a senior team leader for the Lowell Summer Music Series. Over the course of his time spent there, he met countless artists and worked with them, including the remaining members of the Grateful Dead, his favorite band since childhood. His showtime specialty was stage security. Showtime is only 90 minutes to 2 hours, but any given day is 10 hours plus. Pat would help set up and strike crews, what the general public doesn't see, all the work required to make a show happen. He developed deep relationships with lots of the crew, both new and existing.

Patrick's life truly was a song, one that hit all the most touching notes. His family hopes his memory will always live in the hearts of those who were lucky enough to have heard it.

He was also the nephew of the the late Francis W. Duffy, the late Sheila Ann Murphy, the late James J. Duffy and late David M. Wayne.

His funeral will begin at the funeral home on Thursday, October 7 at 9:30 a.m. followed by procession for his funeral service at 11 a.m. at Lowell Cemetery O.M. Whipple Garden of Remembrance, 77 Knapp Ave, Lowell, MA.

Please leave a message of condolence here or on Facebook.

For those who wish to make a donation, please consider the charity linked below, Michael was a childhood friend of Patrick's.

or copy and paste the text below.