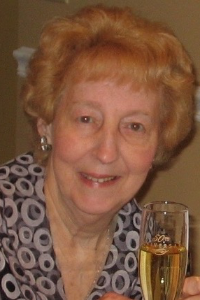 She is survived by her four children, Robert Wolfe, Jr. and his wife Michele of Hempstead, NH; Kevin Wolfe of Franklin, Jane Kay and her husband Scott Kay of Franklin and Daniel Wolfe of Hudson, MA.

Relatives and friends are invited to attend funeral services in the Charles F. Oteri and Son Franklin Funeral Home, 33 Cottage St. Calling hours are 9:30 A.M. to 10:30 A.M. on Saturday, October 2nd. In addition, on Saturday, a funeral Mass will be held at St. Mary's Church, 1 Church Sq. Franklin at 11:00 A.M. To view the Mass to view the Mass stmarysfranklin.org

In lieu of flowers, donations can be made to the Alzheimer's Association (www.alz.org); the American Cancer Society (www.cancer.org) or the Rett Syndrome Foundation (www.rettsyndrome.org).