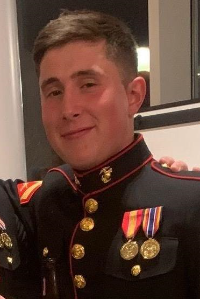 BUXTON – Ryan Patrick Yebba, age 24 passed away suddenly on September 23, 2021.
Ryan was born on June 7, 1997, in Boston, Massachusetts to Patrick and Elizabeth (MacKenzie) Yebba, Jr.
He graduated from South Portland High School in 2015 and later joined the United States Marine Corp. Ryan was currently employed at R.J. Grondin & Sons, in Gorham ME. He is predeceased by his maternal grandparents Paul and Teresa MacKenzie. Ryan is survived by his parents, Patrick and Elizabeth, his brother Jack, his paternal grandparents, Patrick and Katherine Yebba, Sr., Aunts and Uncles, Mary and Kevin Lilly of Boise, ID, Paula MacKenzie of Plymouth MA, Thomas and Margaret MacKenzie of Plymouth, MA, Teresa and Bruce King of Portland, ME, George and Maryann MacKenzie of Harpswell ME, Laura and Michael Melle of Ionia MI, and Michael Yebba of St. Petersburg, FL and many, many cousins. Ryan also leaves behind a large and close-knit group of steadfast and loyal friends since the sixth grade.
A private memorial service will be announced at a later date.
Online condolence messages can be submitted at the Chad E. Poitras Cremation and Funeral Service, Buxton, website, www.mainefuneral.com
Donations in Ryan’s memory can be made to The JED Foundation at Jedfoundation.org
https://donate.jedfoundation.org/fundraiser/3506041


Arrangements have been entrusted to Chad E. Poitras Cremation and Funeral Service, Buxton, www.mainefuneral.com
- Celebrating the Lives of Veterans -