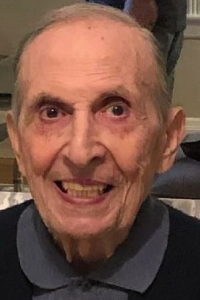 Louis J. “Charlie” Dell’ Aria of Winthrop formerly of East Boston passed away on September 25, 2021. He was 92 years old. Louis was the beloved husband of the late Lillian L. (Micciche) Dell’ Aria. Born in Boston, he was the cherished son of the late Charles and Sadie Dell’ Aria.

Louis began working at his father’s cobbler and repair shop, Charlie’s Shoe Repair in East Boston, as a young man and eventually became the proprietor of the business after his father’s passing. Louis was always known a hardworking and dedicated family man, always providing for his family.

Louis was the devoted father of Robert L. Dell’ Aria and Janis M. (Dell’ Aria) Richards both of Winthrop. He was the cherished brother of the late Salvatore Dell’ Aria and his late wife Anne Marie “Dolly” Dell’ Aria. Louis was also survived by many loving family members, cousins and friends. Visiting hours will be held in the Maurice W. Kirby Funeral Home 210 Winthrop St. WINTHROP on Thursday, September 30, from 9-11AM followed by a funeral Mass in St. John the Evangelist Church-Winthrop at 11:30AM. Relatives and friends are invited. Interment will be in Winthrop Cemetery (Belle Isle Section).