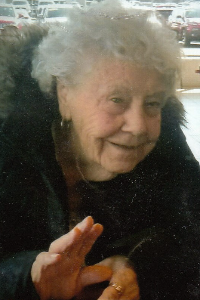 Theresa C. Nulty, 92, of Woonsocket died Saturday September 25, 2021 at Oakland Grove Health Care Center. She was the loving wife of the late Raymond P. Nulty. They were happily married until his passing in October 1968.
Born and raised in Woonsocket she was a daughter of the late Romeo and Marie Louise (Cormier) Rainville. She was a lifelong resident of the city.
Know to all as “Terry”, she was employed at US Rubber for over 25 years, at the CVS warehouse for over 30 years and also at Hasbro in Pawtucket for several years. Terry’s good health and strong work ethic enabled her to work until she was 80, a feat she was proud of.
BINGO was Terry’s game of choice. Many a night would find her at any one of several area Bingo games having a good time while trying her luck.
Terry’s happy place was being at the beach where she liked to go clamming and have fun. Terry loved her dogs as her furry friends. Terry also went on a number of memorable bus trips including jaunts to Foxwoods and Atlantic City.
Terry will be remembered as a friendly, outgoing and sociable lady. Terry persevered though the loss of her husband Raymond at a young age due to ill health. Her positive outlook on life and upbeat “joie de vivre” could be easily felt and radiated to those around her.
Terry is survived by her daughter Donna M. Gelinas and her granddaughter Jody Gelinas both of Woonsocket. She was the sister of the late Urbain “Bob” Rainville, Laurent “Larry” “Babe” Rainville, Muriel Muratori and Giselle Croteau. She is also survived by many nieces and nephews and their families.
Her funeral will be Friday October 1, 2021 at 9:00 am from the Menard-Lacouture Funeral Home, 127 Carrington Ave. Woonsocket followed by a Mass of Christian Burial at 10:00 am in Precious Blood Church, Carrington Ave. Woonsocket. Burial will follow in St .Charles Cemetery, Blackstone. Visiting hours are Thursday from 4-7 p.m. In lieu of flowers memorial donations may be made to the Alzheimer’s Association of RI 245 Waterman St. Suite 306, Providence, RI. 028906 or www.alz.org.
www.menardfuneralhome.com