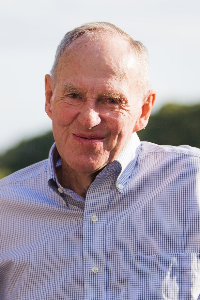 Ferguson, George W. of Needham and Centerville. ”Ho hum.” That was the way George Ferguson let you know he was ready to leave a party or get up from the table after a meal. On September 21, George said his final “Ho hum” with Jean, his beloved wife of over 60 years, by his side. He was 87 years old.

George Winthrop Ferguson was born in Boston and grew up in Belmont where he and his brother, Sandy, often ran to beat the first bell at Belmont Hill School. He went on to Boston University and spent his professional life in the insurance brokerage business, ending his career as President of Accordia in Boston. He was an active participant in his daughters’ educations at Tenacre Country Day School and Dana Hall School, serving as treasurer and trustee for both schools. As a former resident of Sherborn and then Weston, MA, he was involved in those town’s civic affairs.
There was so much more to George than his professional and philanthropic accomplishments. He loved his time on the ice or in the stands at hockey rinks around the Boston area. He often stopped at Mt. Auburn Cemetery on his way to work to look for warblers, thrushes, and tanagers. Birdwatching took him to the end of the earth in Alaska and, in later years, led him to become a docent at Myakka River State Park in Florida.

It was hard to find a place that George cherished more than Cape Cod. Summers would find Jean and him eating their lunch on CBA beach, surrounded by family and lifelong friends. And, if he wasn’t at CBA, he was on Sandy Neck, either on the beach or at “the shack.” He would take a daily swim in Wequaquet Lake, and in the winter, his iceboat would glide across the frozen water. George enjoyed fishing, duck hunting, and puttering in his yard. In the summer, he loved to put the dock in the lake, and in the winter, hand out gifts around the Christmas tree. George truly lived every day to the fullest.

George is survived by his wife, Jean, his two daughters, Lee Frechette and Jenny Letowt, their husbands Peter and Phil respectively, as well as four grandchildren.
A private family burial will be held at the Mt. Auburn Cemetery with a memorial service to take place at a later date. Gifts in George’s honors may be made to Mass Audubon’s Long Pasture Wildlife Sanctuary” mailed to Mass Audubon, 208 S Great Road, Lincoln, MA 01773, or online at http://www.massaudubon.org/honorary-memorial-gifts or to the Belmont Hill School, 350 Prospect Street, Belmont, MA 02478, or online at www.belmonthill.org/about/give/make-a-gift."