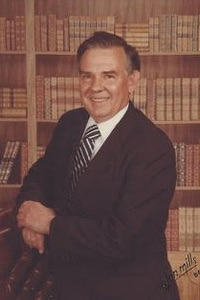 On Thursday, September 2, 2021, Donald Riker Ferry passed away peacefully in his sleep after a valiant battle with cancer.

Don was born and raised in East Orange, N.J on August 28, 1929. He graduated from the Northfield Mount Hermon school in 1946. He briefly attended Dickenson College in Carlisle, PA before transferring to Ogelthorpe University in Atlanta, where he met his wife, Dory Strauss from Highland Park, IL. After graduating Ogelthorpe in 1952, Don and Dory married in October of that same year. They lived in Newport, R.I. while Don attended Officers Training School and continued to serve in the Navy. Following his honorable discharge from the Navy, they moved to Short Hills, N.J. where they raised their children, Jennifer and Thomas.

When Don was growing up, he spent his Summers in Sea Girt, N.J., and life-guarded on the beaches there when he was a young adult. After he retired, he and Dory moved to Sea Girt for the next 20 years. Don loved Sea Girt and the Sea Girt Lighthouse and was very involved in Lighthouse business for many years. They moved to Massachusetts to be closer to family in 2014.

Don will be remembered for his kindness, sense of humor and his easy going personality.

Don’s wife, Dory, passed away in April of 2020. He is survived by his children, Jennifer (Drew) and Thomas (Nancy) and five grandchildren, Madeleine, Olivia, Natalie and Riker Ferry, and Samuel Fischer.

A private family gathering will be held at the end of the year.