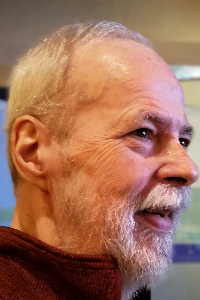 Dennis followed his father into the armed services, working in intelligence and computer science for the US Army before entering the private sector. There, he founded a training and publishing company, WH&O International, and wrote the gold-standard instructional manuals for fourth-generation programming language NATURAL. In addition to working as a sought-after instructor, Dennis helped found the NATURAL Conference and built countless professional relationships all over the world.

Dennis was an avid philatelist with a broad collection of stamps focused on the United Nations, reflecting his fascination with the world and its cultures. He lived around the world, including in Japan, Germany, and Saudi Arabia. He loved art of all kinds, and had a particularly infectious enthusiasm for music and architecture. He loved sailing and wind surfing, and was an ambitious gardener in his later years.

Dennis was fun-loving and adventurous, and had an ineffable charm that endeared people to him throughout his life.

Dennis is survived by his wife, Patricia Fennessey of Wellesley, as well as his four children - Michael, Sarah, John, and Virginia - and four grandchildren - Logan, Molly, Genevieve, and Olivia - who all loved him dearly.

A private visitation will be held at the George F. Doherty & Sons Funeral Home, 477 Washington St., Wellesley on Saturday, Sept. 25. Funeral and interment services will also be private.

In lieu of flowers, expressions of sympathy may be made in Dennis’ memory to the Michael J. Fox Foundation for Parkinson’s Research, P.O. Box 5014, Hagerstown, MD 21741, michaeljfox.org/donate