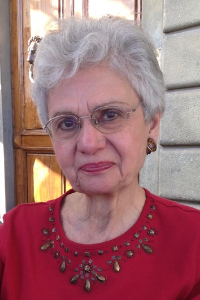 DiMasi, Geraldine (Modafferi) of New York, N.Y. Died September 20, 2021, age 87, peacefully in the home of her daughter, Lisa in Wellesley, MA, surrounded by her loving family. Geraldine (Geri) led a fiercely independent and robust life in Manhattan for almost 30 years, enriched by the company of treasured friends and neighbors. Her intelligence, grace, wit, beauty and sassy nature will be greatly missed by all who loved her.

Born in Watertown, MA in 1934, and raised in Astoria, N.Y., Geri was the daughter of Anthony and Eva (Frissore) Modafferi and younger sister of Joanne. Although the family lived modestly, Geri enjoyed a formal piano education at Turtle Bay Music School in Manhattan through the end of high school. She always owned a grand piano and played for family and friends throughout her adult life. Geri began her professional career as an executive secretary at CBS upon graduation at age 17. She met the love of her life, Henry DiMasi at a St. Patrick’s Day Dance at the Statler Hotel on a snowy evening in 1956. They married in 1957 and celebrated 43 years together until his death in 2001. During her 20 years as a widow, Geri embraced all that New York and the world had to offer – attending lectures at the Italian Cultural Institute, and concerts at the American Popular Song Society and her favorite jazz clubs. She was also a member of The Murray Hill Neighborhood Association and a parishioner at The Church of Our Savior. She especially loved the community she found at The Carlton Regency Apartments where she lived. She traveled throughout Europe and South America to nourish her adventurous spirit and quest for knowledge of other cultures.

Geri is survived by her sister, Joanne Petito, as well as her four children and their spouses: Lisa Howe (David); Don (Anne); Richard (Leah); and Greg (Teresa). She is also survived by her five loving grandchildren: Christiana Donohue (Gibson); Francesca Howe; David Howe, III; Jason DiMasi; and Lucy Fontana. Her Funeral Mass will be celebrated at 12 noon on Saturday, September 25, 2021 at St. Patrick’s Church, 212 Main St., Watertown, followed by a burial at St. Patrick’s Cemetery, 999 Belmont St., Watertown. In lieu of flowers, it would be meaningful to make a memorial gift to her beloved American Popular Song Society either online: http://www.apssinc.org/donate.html or by check payable to, “APSS” and mailed to any of her children for forwarding to the Society.