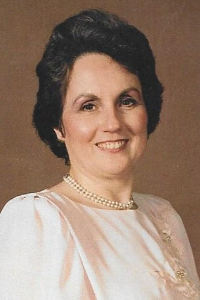 She was born an identical twin daughter to the late Harry “Daniel” and Ethel Elizabeth (Huey) Rairigh on March 8, 1935, at the family home in Gipsy.

When Ada was six months old, her parents moved the family, consisting of the twins and two older brothers, to Hillsdale into the former home of the late Dr. and Mrs. Ernest E. Heilman. Their family home became the new location of the Rairigh Funeral Home in Hillsdale.

Ada and her twin sister graduated from Montgomery Township High School in Arcadia in 1953. Upon graduation, both sisters moved to Washington, D.C. to begin their careers as federal employees with the Federal Bureau of Investigation. Ada worked for thirty years with the General Services Administration as a Design and Construction Contract Manager - a position that took her to various parts of the U.S., such as Kansas City, New York City and the DC area as she advanced in her career. Ada retired in January 1997.

After retirement, Ada moved to Kentucky to volunteer with the Christian Appalachian Project. While there, her love of the arts led her to matriculate at Morehead University in Morehead, KY, where in 2002 she earned an associate degree from the School of Humanities.

After her stay in Kentucky, Ada moved to Florida, where she learned to embrace the heat and forget about the cold winters back home. After ten years of fun in the sun, Ada moved to Maryland to be near her daughter and family.

Ada had become the beloved matriarch of the Rairigh family. Ada’s legacy to her family continues on through the many treasured memories and the cherished cards and thoughtfully selected gifts she sent to them over the years. Ada accompanied each item with a special note handwritten in her beautiful penmanship detailing how she had been thinking of that family member that day and ending with a closing sentiment affirming her love.

She will be greatly missed by her daughter: Drena Lee Anderson and wife Nancy Dimaio of Hyattsville, MD; six nieces and nephews and a great nephew and great niece.

In lieu of flowers, memorial contributions to the Alzheimer’s Association at 225 N. Michigan Avenue, FL 17, Chicago, IL 60601 or at www.alz.org, would be greatly appreciated by her family.