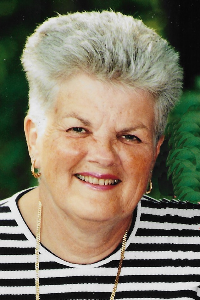 Kathleen graduated from St. Mary’s in Brookline and then went to work for New England Bell. Later she went to work for Carter’s and Baybank. She married Paul T. Quinn of Newton in 1953 and they raised their family in Dedham. She was a member of St. Mary’s Church, Dedham, the Red Hats, and St. Mary’s Sodality. She loved her Friday nights with the ladies at Papa Gino’s in Dedham. She enjoyed spending time on Sundays with her family at home, long drives for ice cream, trips to the beach in Marshfield, summer camping trips, and long road trips to Florida.

Visiting hours will be held at the George F. Doherty & Sons Wilson-Cannon Funeral Home, 456 High St., DEDHAM on Sunday, Sept. 19 from 4-8pm. Her funeral will take place from the funeral home on Monday, Sept. 20 at 9am followed by a Funeral Mass in St. Mary’s Church, Dedham at 10am. Relatives and friends kindly invited. Interment in St. Joseph’s Cemetery, West Roxbury.

It was from the depth of Kathleen’s generous heart that she always gave what she could to serve the underserved. So therefore in lieu of flowers donations may be made in her memory to Good Shepherd Community Care, 160 Wells Ave., Newton, MA 02459.