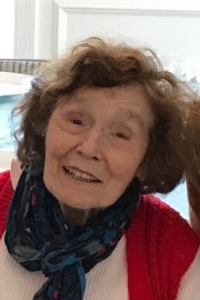 Giuseppina V. (Pezzuto) Antognetti of Dedham, MA passed away on Wednesday, September 8, 2021, at the age of 88, after a brief illness.

The youngest of three siblings, she was born in St. Pietro del Carso, Italy on January 1, 1933 to Michele and Maria (Lauriola) Pezzuto. She was the beloved wife of the late Ermindo Antognetti for 59 years, whom she married shortly before immigrating to the United States in 1960.

A devoted mother of 4 children, she is survived by Giovanna and son-in-law Matthew Ashe of Foxboro, MA, Rita and husband Clay Emerson of Orlando, FL, Philip Antognetti of Dedham, MA, and Mike and wife Laurie Grant of Lee, NH. She dearly loved her two grandchildren, Peter Antognetti of Greensboro, NC and Benjamin Antognetti of Lee, NH. She was predeceased by her brother Pino Pezzuto, of Vasto, Italy and sister Celestina DeFanis of Pescara, Italy. She is also survived by a large extended family of nieces, nephews, and cousins. Zia Enza will be missed and remembered by many!

She became an American citizen in 1971 and embraced American holidays in her own way. Not everyone gets lasagna and turkey on Thanksgiving! Her culinary skills were exceptional, and well regarded. She excelled at being able to create a warm and welcoming home environment, having hosted numerous family gatherings and many visiting relatives over the years.

Her professional training as a seamstress in Italy influenced her lifelong sense of fashion. After marriage she gave up this career and devoted herself to her family but continued to make clothing for herself and her children, including tailored suits and winter coats.

Our family would like to express our deep gratitude to the hematology specialists at the Mass General Cancer Center, Dr. Annemarie E. Fogerty, MD, and Kathryn Allen NP, for the superlative care and support they provided to our mother.

Funeral service and interment in Brookdale Cemetery, Dedham will be private.