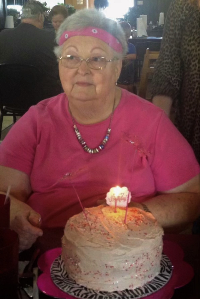 Tonnie Ruth Denby Carter of Tallahassee, Florida passed away peacefully in her sleep on September 13, 2021 after an extended illness. She was born June 4, 1935 in Tifton to Herman & Annie Ruth Denby. She was raised in Tifton and that is where she met her future husband and the love of her life Charles “Sonny” Carter while visiting his family home. She said the minute she saw him she knew that he would be the man she would marry. And married they did on June 27, 1954. They spent almost 40 years together until his death on May 14, 1994. They enjoyed the outdoors, camping, fishing and just being with family and friends especially at the Native American Pow Wow’s. She loved the dance ring.

She was credit manager at Skandia Draperies for many years. She ended her professional career after more than 10 years as an accountant with Krause, Humphress, Pace & Wadsworth.

In her retirement years she enjoyed traveling & camping with her brothers & cousins and with her faithful companion – her Yorkie Clooney.

She was preceded in death by her husband; her parents; one daughter, Bonita Carol “Bonnie” Carter; two brothers, Rheudean Denby & Charles Denby; and one nephew, Ray Denby.

There will be a visitation on Friday, September 17, from 4:00 – 6:00 at Culley’s MeadowWood on Timberlane Road, Tallahassee, Florida. There will be a private family burial on Saturday in Tifton.

In lieu of flowers, she asks that you make a donation to your favorite charity or perform a random act of kindness for a stranger.

She also requested that no one dress up. No coats & ties, etc. Wear your favorite jeans and comfortable shirt (as long it is NOT a UF Gator shirt!)

We would also like to send a very special thank you to the staff at Big Bend Hospice House for making her final days and her crossover so peaceful.