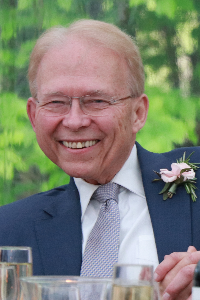 Bentley, Craig Einar of Wellesley, MA passed away peacefully Thursday, September 9, 2021, surrounded by his family. Born in Madison, WI to Orville and Enolia Bentley, Craig was raised in Ohio, South Dakota, and Illinois and proudly identified as a South Dakotan. After graduating from Urbana High School, Craig attended Dartmouth College where he discovered his enduring love of the mountains. After graduating from Dartmouth in 1972, he worked for Harris Bank in Chicago. His work later took him to Paris and Amsterdam, where he met his wife, Kathy. They discovered a shared love for adventure and embarked on extensive travels throughout Asia, volunteering in refugee camps in Thailand and speaking for USIA in India and Bangladesh. Years later, these experiences served as intriguing stories for family and friends.

After their travels, Craig and Kathy established their family home in Wellesley, where they raised their children, Jonathan and Morgan. Craig became an active member of the local community, volunteering with the Wellesley Village Church, World Boston, the Wellesley Community Center, and many other organizations. Craig was passionate about his work at Bates Communications, his dream job, which allowed him to travel extensively, counsel business leaders, and work closely with a team of supportive colleagues.

Craig was an avid outdoorsman. Throughout his life, he enjoyed many sports including tennis, sailing, skiing, hiking, and backpacking. While working in Europe, Craig loved exploring the Alps and completed the Tour du Mont Blanc with a close friend. Stateside, Craig cherished the White Mountains and was fiercely proud of climbing 43 of New Hampshire’s 4,000 footers following treatment for his initial cancer diagnosis in 2005. In addition to hiking year-round, Craig spent his winter weekends skiing with his family in the Mount Washington Valley. He even had the gumption to attempt an ascent of Mount Rainier despite a torn Achilles tendon.

Craig is survived by Kathy, his loving wife of 38 years, his son Jonathan (wife Sarah) of Weston, daughter Morgan of Wellesley, and brother Peter (wife Sherri) of Montana. He was overjoyed by the birth of his grandson, Calder, in June 2021.

Services celebrating Craig’s life will be held Thursday, September 23 at 2pm at the Wellesley Village Church. Memorial contributions may be made in Craig’s name to the Dartmouth Outing Club or the Appalachian Trail Conservancy.