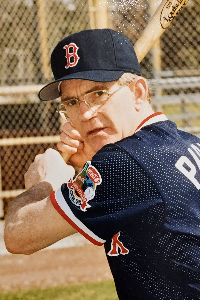 West Baldwin- Ronald F. Parker, age 74, passed away on Sept 4, 2021, at Maine Medical Center in the presence of his loving family. Ron was born on Dec 15, 1946, the oldest of the late Frank & Margorie Parker. He attended Cornish Elementary and was a 1965 graduate of Gorham High School.

Ron enjoyed growing up in Cornish with his many friends. It was where he first discovered his love of baseball and made many lifelong friends while playing. His greatest memory, as a kid, was going to Vermont with his baseball team for the regional finals. Ron worked at Archie Evan’s garage, where he learned many skills. It was while working here that Ron met his wife, Veronica, who worked at Dall’s Diner in Cornish. They were married on September 17, 1965, and they were about to celebrate 56 years together. They raised their family in West Baldwin.

Ron worked at Coca Cola Bottling Co. of So. Portland, ME, where he retired as Sales Manager after 42 years of service. Ron was always noted for his witty responses, being a dedicated leader, and building many deep relationships with his coworkers. He was a strong family man, and no sacrifice was too high when it came to his family. Ron loved hunting and fishing, and spent many days teaching his children and grandchildren the love of both. He loved to teach anything from changing oil, carpentry skills to life’s lessons. He was a practicing member of the Masons, and twice a past Master of Greenleaf Lodge #117. Ron loved gardening. His garden was a great source of pride, and he kept his entire family supplied with his meticulously grown and well-documented produce.

His greatest love was baseball. He spent many hours playing pickup leagues in his younger days, coaching for the Baldwin Youth League, and in later years transitioned to umpiring. He quickly earned a reputation as one of the best around and had many requests to umpire tournament games (from Twilight to Little League). He loved going to the Red Sox with his children and grandchildren. He was incredibly proud of his family’s brick, near Gate B at Fenway Park, which lists his father’s and uncles’ names.

He is survived by his wife, Veronica; his children- Ronald D. Parker and his wife Ginger of Cornish, Shelly Irish and her husband Mark of Parsonsfield, and Aaron Parker and his wife Heather of Cornish; his brother, Reggie Parker, of Buxton; his sister, Judy Adams, of Cornish; ten grandchildren -Zackery, Adam, Nicole, Savannah, Ethan, Emily, Arielle, Jackson, Natalie, and Caroline; and three great grandchildren- Levi, Frank & Henry.

Visiting hours and service will be held on Saturday, September 11, at the Cornish racetrack / old fairgrounds. Visiting hours will be from 1 to 3 p.m., service will be at 3 p.m., with a reception to follow there from 4 to 6 p.m. Burial will be a private family event later. Online condolences may be expressed at the funeral home website: mainefuneral.com