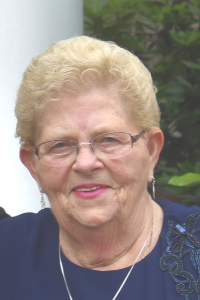 Ruth Ann (Gauthier) Page 82, of Salem, passed away peacefully on September 3, 2021, surrounded by her loving family, at the Kaplan Family Hospice House after a brief illness. She was the devoted wife of Francis J. Page with whom she shared 63 years of marriage.
Born in Ipswich and raised in Salem, she was the daughter of the late George and Bertha (Wilkinson) Gauthier. She was a graduate of Salem High School Class of 1956. She met her husband in high school and they dated for several years. They married in 1957 and raised two children. During the early years of her marriage she worked at CBS/ Hytron.
For over 50 years, she and her husband were known throughout Salem as Mr. and Mrs. Softee, as they both operated Mr. Softee ice cream trucks. Her daughter Debora spent many days riding with her to keep her company, building the special mother daughter bond that they shared. She delighted in seeing all her customers, especially the children, who were also excited to see her when they heard the Mr. Softee jingle. Many of her customers had her come to their family celebrations so they could celebrate with ice cream. Her grandchildren got great pleasure in working with her, as they got to make their own ice creams and eat as much as they could.
She took great pleasure in spending time with her family. She especially enjoyed all the family occasions over the years: First Communions, high school and college graduations, and birthday celebrations. She truly enjoyed spending time with her family during the Thanksgiving and Christmas holidays. She and her husband enjoyed numerous vacations to Disney World. They also enjoyed spending time at the Salem Senior Center and the trips they took through the senior center.
In addition to her loving husband Francis, she is survived by her daughter Debora Deschenes and her husband Andre of Peabody. She also leaves three grandchildren, Andre and his fiancée Shauna, Daniel, and Christine. In addition she leaves her sisters-in-law Sandra Christman and Theresa Gaudette and brother-in-law Raymond Page, as well as several nieces and nephews and close friends. She was predeceased by her son Francis E. Page.
Relatives and friends are invited to her funeral on Friday, September 10 at 9:00 AM from the Levesque Funeral Home, 163 Lafayette Street, Salem [RT 114 / 1-A] followed by her funeral mass at Immaculate Conception Church on 15 Hawthorne Boulevard, Salem at 10:00 AM. Visiting hours: at the funeral home on Thursday, September 9thfrom 4 to 7 P.M. Burial will be at Cedar Grove Cemetery in Peabody. For guestbook and to leave a message of support to her family, please visit www.LevesqueFunerals.com