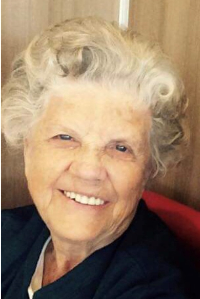 Betty Margaret Lawson Jackson, 89, of Omega (Colquitt County) passed away Tuesday, August 31, 2021, at her residence. Her funeral service will be held at 2:00 p.m. Tuesday, September 14, 2021, at Omega Church of God with the Rev. Rickey Wells and the Rev. Joseph L. Crumley officiating. Mrs. Jackson will be laid to rest at Omega Cemetery. The family will receive friends on Monday, September 13, 2021, from 6:00 to 8:00 p.m. in the Chapel of Bowen-Donaldson Home for Funerals.

Born December 22, 1931, in Mayo, Florida, Mrs. Jackson was the daughter of the late William A. Lawson and Dora Nolan Lawson. She was also preceded in death by her husband, James C. Jackson; one daughter, Betty Faye Smith; one son, Paul Steven Jackson; one infant Jackson; three brothers, Edward Lawson, Jr. Lawson and Bronzell Lawson; and two grandchildren. Before retiring, she worked at Queen Carpet in Tifton and she was a charter member of Omega Church of God. She loved God and her family and she loved fishing. She also enjoyed sewing and making quilts.