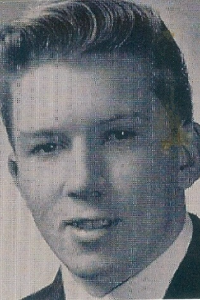 John “Jackie” Moulton, Jr. of Medford formerly of the Beachmont section of Revere, and Winthrop, passed away peacefully at his home surrounded by his loving family, Saturday, August 28, 2021 following a brief illness. He was 79. Jackie, as he was affectionately known to his family and friends, was the beloved husband for 56 years of Georgian (Spadaro) Moulton. Born in Boston he was one of six children of the late John J. and Dorothy M. (Kenefick) Moulton, Sr.


Jackie was raised and educated in Revere and Winthrop. He was a 1960 graduate of Winthrop High School. Shortly following high school Jackie began his career working at Logan Airport as a Ramp Service Technician for TWA. Jackie worked there for over forty years prior to his retirement in 2002. Throughout his life Jackie enjoyed traveling with family and friends. For nearly twenty years he especially loved spending two weeks annually in Aruba with his family and many cherished friends. Jack was also an avid Boston sports fan and had a passion for Horse Racing. He was a longtime member of the Medford Elks Lodge 915. Jackie will fondly be remembered for his welcoming and gentle personality, his humor and laughter, and his unconditional love for his family and friends. He will be greatly missed.


In addition to his beloved wife, Jackie is survived by his children; Kimberly Crowley and her husband Lawrence of Medford, and John C. Moulton, and his loving companion Angela Santaniello of Wakefield. He was the loving grandfather of Korey, Jaclyn, Alexandra, and Georgia. Cherished brother of Dorothy Filippone of Virginia, Maureen Castelli and her husband Hildo of Revere, Judith Fernandez of Florida, the late Joan Sordillo and Robert F. Moulton. Brother-in-law of Joyce Randazzo of Medford and is further survived by many nieces, nephews and dear friends.


Funeral services will be held from the Dello Russo Family Funeral Home, 306 Main St., Medford, Saturday, September 4th, at 9 a.m. followed by a funeral Mass celebrated in St. Joseph Church, 118 High St., MEDFORD, at 10 a.m. Relatives and friends are respectfully invited to attend. Visiting hours will be held on Friday from 3 to 7 p.m. Services will conclude with burial at Oak Grove Cemetery, Medford. It has been requested that in lieu of flowers contributions may be made in Jackie’s memory to the St. Jude Children's Research Hospital, Memorials Processing, 501 St. Jude Place, Memphis, TN 38105-9959.