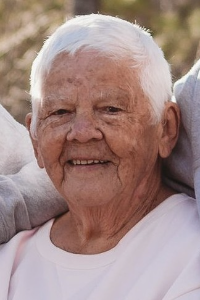 Hiram - Joyce M. Perry, 90, of Hiram and formerly of Kezar Falls, peacefully died on August 27, 2021 at her daughter's home, with her by her side, in Hiram where she had been living. She was born in Porter on June 27, 1931 a daughter of Joseph and Grace (Cole) Locklin. She was educated in local schools and was a 1949 graduate of Porter High School. She was a sister to Lionel Locklin, Beverly Theriault and Leona Pierce.

Joyce walked 10 miles once as a teenager with her cousin Glenice just to wave hello to a young man named Horace Perry. She married him on June 28, 1949. Together they raised four children: Stephanie Perry of Kezar Falls, Leonard Perry of Miami, FL., Rosalie Colby and husband Jeff of Hiram, and Joseph Perry of Kezar Falls. Her grandchildren: Missy, Richie, Josie, Ashley, Ainsley, Evan, Cole, Elizabeth, Lilly, Ella, and Owen. Great grandchildren: Levi, Bailey, Griffin, Isla, Agnes, Payton, Isiah, Silas, Lilah, Piper, Calvin and Wade. Her family was without a doubt the most important thing in her life.

Joyce was always a hard worker. She was an elevator operator at the Hotel Harrisburg in Pennsylvania, a shift leader at the Kezar Falls Woolen Mill, a seamstress at Maine Dress Co., worked in the deli at Goodwins Market, was a cook at both Goodwins Lodge and Camp Hiawatha, an assembler at Vulcan Electric, and even a Powder Puff driver at Beech Ridge Speedway! She was probably best known for working at the S.A.D. # 55 School Lunch Program for 38 years, retiring at the age of 82.

She was a wonderful cook and made everything homemade. Apple squares, coffee ice cream, doughnuts, cookies, fudge, blueberry cake, baked beans, brown bread and sour pickles to name just a few of the family favorites. She enjoyed a cold beer on occasion, her favorite was Honey Brown. The kids and grandkids remember green Kool-Aid would always be in her refrigerator for them. She also loved tending to her perennial gardens and vegetable gardens.

Some of her favorite memories include a school trip to New York City to see the Rockettes and Bing Crosby. Camping at Niagara Falls. Trips to Hills Beach, Storyland and Douglas Mountain with kids, grandkids and great grandkids. Countless little league, pee wee basketball and any and all grandkids sporting events. Family reunions at Hills Beach, Locklins Campground and the Legion Hall. She had a great love of all "handsome" animals and so enjoyed watching the birds.

At Joyce's request, a private graveside service is planned. Arrangements are respectfully handled by Poitras, Neal and York Funeral Home. Online condolences may be expressed at: www.mainefuneral.com

In lieu of flowers, donations may be made to: The Horace and Joyce Perry Memorial Scholarship, c/o MSAD 55, 137 South Hiram Road, Hiram, ME 04041.