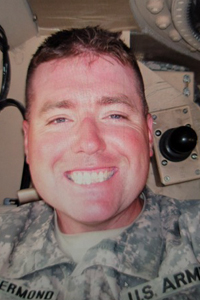 John Joseph Deyermond, Jr passed away unexpectedly in Galveston, TX. He was an avid traveler almost from the day he was born in Methuen, MA to John & Barbara (Poschen) Deyermond. John had a smile that could light up a room and he viewed no one as a stranger. To John there were simply people he hadn’t met yet. Johnny was ever the ringleader for practical jokes (often at the expense of his loved ones) and always found humor no matter what the situation.

John was a wanderer at heart and happiest when he was on the road heading from one adventure to the next, especially with a dog by his side or deployed in whichever “sandbox” the military sent him to.

After graduating High School Johnny enlisted in the US Marines Corps where he served various duty assignments. He deployed on the USS Trenton to Mogadishu, Somalia for a humanitarian mission where he was part of the Marine security detail at the airport during the “Black Hawk Down” incident. In 1996 John left the Marines and went to work for Cox Cable company in New England Answering the call of service again, Johnny later re-enlisted in the US Army Massachusetts National Guard as a Military Policeman where he was deployed to Iraq in 2009-2011 as part of the 747th Military Police Company. After duty with the National Guard, he went to work for a civilian security contractor in Afghanistan. During his time in Afghanistan two major events took place. First, he met the woman who would later become his wife and second, he suffered a wound to his left leg which would result in amputation several years later.

Sara Laurel Jackets and John Deyermond were married in March 2017, or so we thought, in Oak Harbor, Washington. John & Sara revealed during the ceremony that the couple had actually been married several months before – and we realized that John had met and married a woman who was a match for his humor and adventurous nature as well as his love of dogs. Johnny & Sara adopted two fur babies, Anni & Ammo then moved from Washington State to Ft. Leavenworth, Kansas (where Sara attended the US Army Command and General Staff college as one of only 12 civilians) and finally to Texas, where they both went to work for the US Army Corps of Engineers in Galveston.

Calling hours will be at the Burke-Magliozzi Funeral Home, 390 No. Main Street, Andover, MA 01810, Friday, Aug 27th from 4-7pm. Burial with military honors will be in Spring Grove Cemetery in Andover, MA, Saturday, Aug 28th at 10am. In Lieu of flowers please consider a gift in Johnny’s name to the Wounded Warrior Project at https://www.woundedwarriorproject.org/donate.