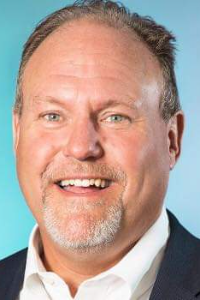 
Brian Scott Glasbrenner came into this world on February 28th, 1965 and left it on August 11, 2021. In between those significant dates, a great life was lived to its fullest and many, many people were touched and blessed because they knew him.

Robert and Gloria Glasbrenner called him "son." Robin called him "big brother." The loving bond between Brian and his grandma Marie, aka Granny was solid. She was his rock. Brian considered Peggy & Duane Heikkinen and Stan & JoAnn Hoffman his surrogate parents. He graced their kitchen tables for many a meal and they all considered Brian a son.

In his early years Brian played hockey. By high school the North St. Paul Polars deemed him a great teammate on the golf course and the ski slopes. He graduated North High in 1983 with close and long time friends Jeff Heikkinen, Billy Trotter and Doug Hoffman, who not only called him buddy, but also brother.

He received his first Bachelors of Science degree in Biology from the University of Minnesota in 1988 and went on to earn his second BS in Chemistry in 1994. With that education and his strong work ethic, Brian enjoyed exciting careers, starting as a Chemist and moving on as a Global Marketing and Business Development Manager, and most recently as the Commercial Director-Americas with NatureWorks. He was proud of his service at HB Fuller and NatureWorks, where he was considered a great collaborator and valuable employee who was always proud of his team and their mission. He particularly enjoyed traveling the world in these roles, meeting new people and embracing new cultures.

Thirty-one years ago he put a ring on the finger of the love of his life, Tami Jo Ferguson. They welcomed the birth of their son, Samuel Brian in 1996 and at that point, Brian was not only a loving husband and good provider, but now he was proudly called "Dad." Tami, Brian and Sam spent many great and memorable times together traveling, snowmobiling, hunting, fishing, refurbishing Antler Lodge, fixing things, and being the three amigos. If you've ever been privileged to see Brian and Tami dance in the sunset, you'd know how perfect they were for each other.

His family grew as sister Robin married Jay Wales and then niece Abby and nephew Jeremy eventually came along. He was a wonderful son-in-law to Jim and Judy Ferguson and brother-in-law to Teri and Randy Thompson, Rob and Jean Ferguson, Ritchie Ferguson and Randy Ferguson. He was called uncle by more nieces and nephews; Melissa and Eric Larson and their daughter Nora, Matt and

Kelsey Thompson and Emily and Claire Ferguson. He was also Godfather to Steve Owens, Kevin Maloney, Jeremy Wales, Ryan Smith and Anja and Ben Heikkinen. Brian was a father-figure and mentor to many, whether they called him dad, uncle, coach, friend or neighbor. He was always ready to lend a helping hand, show someone how to do something, or give good advice. He loved to teach and he did so with great patience.

Brian had many things that he held close to his heart in addition to his family. His adventures in Wawina since he was 8 years old, his lake home ready for retirement, his bursting pride of Sam and his accomplishments, Hawaii tattoos with Greg, chasing snow with gusto with his snowmobile and crew, the devotion to his Godchildren, supporting local charities, and SO many more.

Brian never did anything half-assed. He was ALL IN with everything....relationships, snowmobiling, hunting, farming, watching the sunset on his favorite Hawaiian beach, boating with kids on an innertube and trying to knock them off, smoking the perfect meats, constructing the ultimate Bloody Mary, explaining plastics, fixing 'that' tractor, fiddling and putzing, and showing up to support his tribe.

Brian had many close and enduring friends. One friend group of over 30 years is the kittenball/bowling team. This tightly knit group meant a lot to Brian. Also the PLA’ers, former co-workers who became good friends with strong and lasting ties. To Brian his friends were part of his family. And his family has a rich cadre of memories, funny (and many embarrassing) stories, and Brian-isms that span his quick, but full 56 years.

This dear human will be greatly missed, but also appreciated for his mark on this world and on those who knew him. Brian had a big heart, sometimes a bit rough around the edges, but ALWAYS big. He leaves behind a village who mourns one of their own.

In true Brian spirit and in lieu of flowers, memorials are preferred to Aiken Sno-Drifters (www.aitkinsnodrifters.com) or a local charity of your choice. Take care of each other and continue to give Brian-worthy bear hugs and share your stories. His family appreciates your love and support. Thank you.

Please be sure to leave a memory of Brian or a "Brian-ism" if you can! His family would appreciate your input.