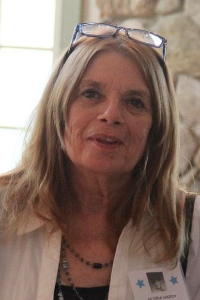 Gloria graduated from Lawrence High in 1968. She owned and operated Indian Rock Video in Windham NH for many years. She will be forever remembered for her amazing sense of humor and undying love for her family and friends.

She is survived by her son, Jesse Jacobucci; granddaughter, Kaitlin Jacobucci; two brothers, Richard Hardy and Robert Hardy; sister, Theresa Hardy-Rozzi-Difeo; several nieces and nephews and the father of her children, John Jacobucci. Gloria is predeceased by her son, Marc Jacobucci and sister, Linda Hardy Buchanan

Following cremation, calling hours will be held on Friday, August 20, 2021 from 5:00 PM to 7:00 PM in the Peabody Funeral Homes & Crematorium, 15 Birch St., Derry, NH. Face masks are recommended for those who are not fully vaccinated. The burial will be held at a later date in Forest Hill Cemetery, E. Derry Rd., East Derry.